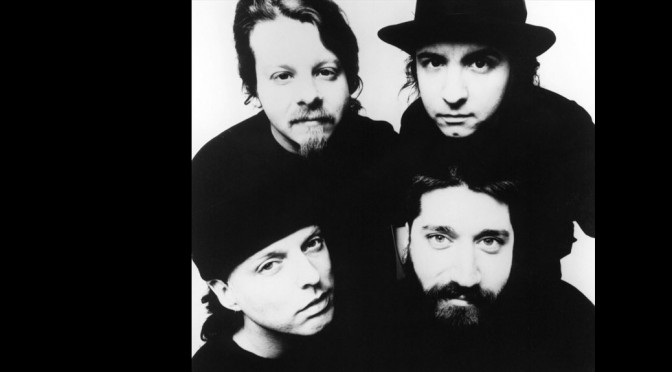 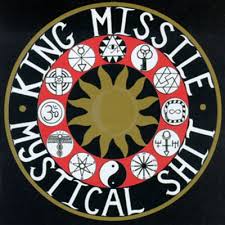 I was hoping Krame‎r would want to make another record, and he did, but Dogbowl didn’t. I asked Dave Rick if he wanted to work with me. Kramer had introduced us, and we had already done one show together. Dave got Chris Xefos, and Steve Dansiger played drums again, and we made “Mystical Shit.”
When “Jesus” became a number 1 college radio song, we started to wonder whether maybe we could get on a bigger label. I wondered about this, but didn’t do anything about it. But Chris Xefos met Marc Nathan in a bar, and Chris told Marc about King Missile, and Marc told Chris that he was an A&R guy at Atlantic Records, and soon after that, we were signed.
“The Way to Salvation,” our first record for Atlantic was also disappointing to me. ‎I felt as though the vocals were way too loud, and I still do. But still, there are a lot of good things on that record. I liked Dave Ramirez’s drumming.  I thought “My Heart is a Flower” came out pretty well. And “The Story of Willy,” and “The Indians” and “Scotland” and a couple of others. Ok, actually, “The Way to Salvation” is fine. But the next record was better. I think everybody thought so.
For “Happy Hour,” we (meaning me, Dave Rick, Chris Xefos, and new drummer Roger Murdock) went back to Kramer and to his studio, which was now located in New Jersey. We spent a month there and made about a third of the record in the studio. That extra 20 minutes made me think it would be fun to call the record “Happy Hour” and make the record exactly an hour long. Which we did, and it was fun, because when you put the CD in, it says “60:00.” Which is fun.
“Happy Hour” was the most successful King Missile record by far. Some people actually bought it, and many more people heard the song “Detachable Penis” on the radio. I didn’t think I’d ever come up with a more successful song, and so far I haven’t. But we made another record for Atlantic (called “King Missile”) and we were dropped soon after it came out, and soon after that, Dave, ‎Chris, Roger and me stopped working together. Except that last year, I made recordings with all of them, and this year, I’m doing a King Missile show with Dave, Roger, and Rachel Swaner. But that hasn’t happened yet, and other stuff happened before that.

After Dogbowl’s departure, Hall asked Bongwater guitarist Dave Rick to help him put together a new band. Rick recruited multi-instrumentalist Chris Xefos, and Hall retained Dansiger on drums. Hall dubbed the new lineup King Missile, dropping the parenthetical “Dog Fly Religion” subtitle “since that was idea.” In late 1989 and early 1990, the band recorded the album Mystical Shit, and in 1990 released it on Shimmy Disc. On the strength of the single “Jesus Was Way Cool,” the album hit No. 1 on the CMJ charts, and the band was signed by a major label, Atlantic Records. This series of events led Hall to make a habit of joking, “‘Jesus’ got me signed to Atlantic Records.” Around this time, King Missile was featured in the 1990 documentary CutTime which chronicled the East Village music scene of 1990.

Another lineup change occurred before the recording of King Missile’s major-label debut, as Dansiger left the band and was replaced on drums by Hypnolovewheel member David Ramirez. The subsequent album, The Way to Salvation, was released on April 16, 1991, and reached No. 2 on the CMJ charts. Atlantic promoted the album with the release of a single, “My Heart Is a Flower,” and accompanying video. 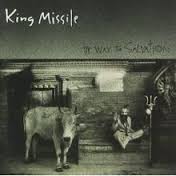 After Ramirez left the group and was replaced by yet another drummer, Roger Murdock, the band recorded its second major-label album, Happy Hour, released on December 15, 1992. The album debuted at No. 1 on the CMJ charts, and its accompanying first single, “Detachable Penis,” became a modest hit, reaching No. 25 on the Billboard Modern Rock Tracks chart. Atlantic released videos for “Detachable Penis” and the subsequent singles “(Why Are We) Trapped?” and “Martin Scorsese,” but neither follow-up single achieved the chart success of “Detachable Penis.” According to Hall, the band realized that its hit song had drawn in many casual fans who didn’t care about the rest of the group’s material; thus, the band began to play the song “early in the set, so that the people who didn’t like us could leave, and we could play for the people who cared. That worked out well. People did leave.” 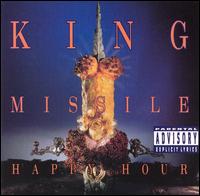 The band’s third and final album for Atlantic was the eponymous King Missile, released April 19, 1994. Neither the album nor its lead single, “Love Is…,” was a commercial success; consequently, the band was dropped from Atlantic, and broke up shortly thereafter because, according to Hall, “there was no reason to stay together.”