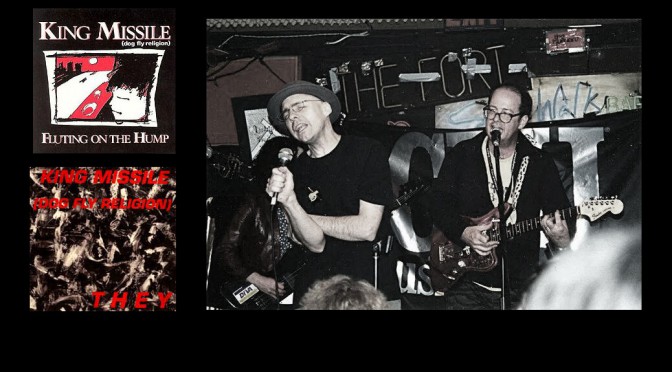 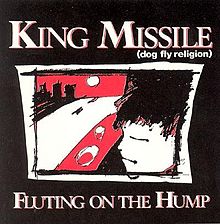 Where to begin? I was enthralled by Patti Smith as a teenager. She and Allen Ginsburg were the first poets that I cared about, and they both worked with musicians a lot, as did some poets I discovered soon afterwards: Amiri Baraka, Anne Waldman, and John Giorno, who I was obsessed with for years.
There was this thing called the poetry calendar, and it listed readings, and open readings, and I went to both, and after my third open reading, I was asked to do a featured reading at the Back Fence, on Bleecker and Thompson Street. I asked Dogbowl, who had been in my first band (the cover band, You Suck)‎, if he would write music and play guitar with me at the reading, and I consider that the first King Missile (Dog Fly Religion) show. We did “Sensitive Artist,” and “Lou,” and probably a few others that later wound up on the “Fluting” record. Soon, after that, we asked Alez Delaszlo, who added bass harmonica and baritone sax to the sound. It was raucous and anarchic and a lot of fun. Rebecca Korbet was a great guitar player, but she played drums with us, and suddenly we were a band. We played East Village art galleries and performance spaces like 8BC, the Gas Station, and this great place on sixth street I can’t remember the name of. I think it was between B and C. ‎There were a lot of cooler bands playing a lot of cooler music, but we didn’t care. We just wanted to act like idiots and have fun and sometimes try to do something a little artful.
In early ’87, we recorded a demo with Kramer at Noise New York (he was recommended by Mykel Board, who had produced the You Suck single). We recorded 10 songs and an instrumental in about ten hours, including mixing, and Kramer offered to put the record out on a label he was starting, called Shimmy Disc. So you see, it was all an accident. It was all a great big misunderstanding.
We made that record, and it got enough college radio airplay to encourage Kramer to encourage us, so we made another record. By this time, Rebecca and Alex were out of the picture, so we got ‎Charles Curtis (an amazing cellist) and Steve Dansiger (drums), both of whom had also been in You Suck (a lot of people were in You Suck. Like 100). But we also had David Licht, who had done a lot of work with Kramer. He did percussion on about half the tracks. And Kramer added keyboards and vocals and other stuff here and there. The result was They (1988), and it had a lot more singing on it. There were three songs by Dogbowl and one by Dave Keener (“Mr. Johnson,” which was originally written for The Purple Sunshine, a hippy band concept that did a demo with Kramer that has since been lost (meaning that Kramer probably recorded over it)). Plus, Dogbowl wrote a bunch of great vocal melodies for me to sing, so only half of the record is spoken. I’m not sure why this record didn’t do as well as “Fluting.” It could have been the record cover, which was an abstract painting that I did that didn’t make for a very attractive cover. My fault. Dogbowl’s cover of “Fluting,” which depicted a scene from “At Dave’s” (the second track on “Fluting”), was a much better cover. I should have asked him to do “They.”

In 1985, writer John S. Hall began presenting his work at open mike poetry readings. After three shows, Hall became a “featured” poet at the Backfence, a performance venue in Manhattan’s Greenwich Village. In 1986, feeling that “20 minutes of me reading poetry would be totally boring,” Hall asked his guitarist friend Dogbowl (Stephen Tunney) to augment his performances with original music. Dogbowl agreed, and with the addition of bassist Alex DeLaszlo, drummer R.B. Korbet, and xylophonist George O’Malley, King Missile (Dog Fly Religion) was born.

In 1987, the band went to the Noise New York studio and in just ten hours recorded and mixed its debut album, Fluting on the Hump. The producer/engineer, Kramer, released the album on his then-fledgling label, Shimmy Disc. The label sent the album to every college radio station that reported to College Media Journal, and the album subsequently performed well on the CMJ charts.

In 1988, Hall and Dogbowl, along with cellist Charles Curtis and new drummer Steve Dansiger, recorded the second King Missile (Dog Fly Religion) album, the longer, more experimental, less “jokey” They. Like its predecessor, the album was produced by Kramer and released on Shimmy Disc. According to Hall, “[the album] wasn’t well received. Dogbowl was itching to make his own records, so we went our separate ways.” Dogbowl went on to record several albums for Shimmy Disc.